The digital sermon notes for Sunday at Manna (11/29) are ready! Click Here

Please Join Us In Praying The Following Revival Prayer...

2 As when the melting fire burneth, the fire causeth the waters to boil, to make thy name known to thine adversaries, that the nations may tremble at thy presence!

3 When thou didst terrible things which we looked not for, thou camest down, the mountains flowed down at thy presence.

4 For since the beginning of the world men have not heard, nor perceived by the ear, neither hath the eye seen, O God, beside thee, what he hath prepared for him that waiteth for him.

Following are some of the names and dates of well-known historical revivals. This is not an exhaustive list but rather a brief overview of some of the major awakenings that have occurred in various places around the world.

If you study revival in any detail you will find that some of the dates seem to conflict with one another. This is simply because when God is moving with great power it is sometimes difficult to trace the origin and conclusion of His work.

I [Evangelist Lou Rossi] have compiled some of the widely accepted dates and awakenings, along with the main human instruments used by God to bring revival.

THE FIRST GREAT AWAKENING OF 1735

This awakening occurred primarily in the New England colonies, and included most of the Northeast as well. The best known preachers were Jonathan Edwards, John and Gilbert Tennent, George Whitfield and Cotton Mather.

Known as the first great awakening, this revival swept through many of the small towns and villages of colonial America. There was an intense conviction of sin, and a marked sense of the presence of God. Most of the eastern cities were affected, especially Boston and Philadelphia. Keen observation of history have noted the correlation between this great revival and the hunger for freedom from British tyranny which ultimately gave birth to the Declaration of Independence.

THE SECOND GREAT AWAKENING OF 1858

This was also referred to as the New York prayer revival. This movement of prayer began in the fall of 1858 and continued until late 1859. What started as a noonday prayer meeting in New York City began to move up the Hudson river and down the eastern seaboard. By February 1859 nearly every major city in America became involved in prayer for revival. Large department stores including JCPenney's and Sears would actually close their doors from 12 to 1 PM each day as men and women gathered to pray. Preachers, layman, businessman, housewives and people from every level of society would stop their activities and pray for God to have his way in their lives.

Early in 1859 conversions began to be multiplied, and thousands of people began to be saved in local churches throughout America. In late February 1859 Baptists actually cut holes in the ice in the Hudson river to baptize new converts. Revival historian J. Edwin Orr noted, “When Baptists do that, you know they’re on fire!"

Out of the 1858 revival the Kentucky camp meetings were born, with many other movements of prayer and world mission endeavors. Reports of this revival reached other countries, and created a hunger for revival around the world.

Churches in Ireland were particularly moved, and they began to fast and pray for God to visit their nation. Revival blessing soon came as the Ulster Awakening became one of the greatest revivals in the history of that country.

London was also deeply affected by the 1858 awakening, and the spirit of revival rested in great measure upon the life and ministry of Charles Spurgeon. The Metropolitan Tabernacle was completed in 1859 to house the massive crowds that came from all over England to hear this man of God preach.

Wales was another country that was touched by the 1859 revival. Many of those who were converted or revived during this awakening began to fast and pray for another revival. Young people were particularly concerned at the turn-of-the-century and were challenged to pray by a minister named Seth Joshua. A young man named Evan Roberts began to attend the prayer meetings and was deeply burdened about revival. God began to give Roberts a deep assurance that revival was going to come, as he prayed fervently for the salvation of 100,000 souls.

Beginning in Evan’s home church, the Welsh revival of 1903 spread across Wales like a prairie fire. At the height of the revival, every church in Wales was crowded to capacity seven nights a week. People from all walks of life sought God through prayer, singing, testimony, and preaching. Many of the roughest and hardened coal miners were saved and changed wonderfully by the power of God. Police in several districts formed quartets to sing in the evening meetings because crime had nearly ceased altogether! I [Evangelist Lou Rossi] have in my files a copy of the evening express which was a Welsh newspaper at the time. For many months the entire paper was dedicated to the revival, with a conversion report of those who were saved each night. One article, dated February 18, 1905, begins with a headline that reads, “REVIVAL CONVERSIONS NUMBER OVER 75,000."

This revival had a monumental impact on a large number of other countries including India, England, Africa, China and the United States.

There are many other notable revivals that you can research and study at your local library or online. Just a few would include...

As you read and study these awakenings you will find references to many other revivals throughout the history of the church. My heartfelt prayer is for God to "do it again," and to birth in your heart a hunger and thirst for His power and glory to be revealed in our land (Psalm 63).

In concluding this manual, I would like to remind you of the five questions that were posed to the Punjabi Prayer Union of India in 1904. As these questions were circulated around the region, men and women began to seek the Lord in prayer. God responded with great revival blessing as many thousands were saved. As you read, study and pray, may God give our nation the revival that we so desperately need.

"I have no bow of burning gold

To shoot my arrows of desire;

And yet, O God, I crave a life

That will transmit Thy holy fire.

I shall not cease from mental strife,

Nor shall my pen sleep in my hand,

Till I have seen God's holy men

Arise and shake our needy land.”

The lyrics to a popular hymn, SWEET HOUR OF PRAYER, remind us of the importance of spending time in prayer with the Lord. Below that, you'll find a powerful and helpful graphic for SPENDING AN HOUR WITH GOD!

During my residence at Coleshill, Warwickshire, England, I became acquainted with W. W. Walford, the blind preacher, a man of obscure birth and connections and no education, but of strong mind and most retentive memory. In the pulpit he never failed to select a lesson well adapted to his subject, giving chapter and verse with unerring precision and scarcely ever misplacing a word in his repetition of the Psalms, every part of the New Testament, the prophecies, and some of the histories, so as to have the reputation of knowing the whole Bible by heart. He actually sat in the chimney corner, employing his mind in composing a sermon or two for Sabbath delivery, and his hands in cutting, shaping and polishing bones for shoe horns and other little useful implements. At intervals he attempted poetry. On one occasion, paying him a visit, he repeated two or three pieces which he had composed, and having no friend at home to commit them to paper, he had laid them up in the storehouse within. How will this do? asked he, as he repeated the following lines, with a complacent smile touched with some light lines of fear lest he subject himself to criticism. I rapidly copied the lines with my pencil, as he uttered them, and sent them for insertion in the Observer, if you should think them worthy of preservation. (From hymntime.com - click on name below to be redirected to the site.)

Sweet Hour of Prayer by William Walford, 1845, Appeared in The New York Observer, September 13, 1845, accompanied by the following, by Thomas Salmon:

That calls me from a world of care,

And bids me at my Father’s throne

Make all my wants and wishes known.

In seasons of distress and grief,

My soul has often found relief

And oft escaped the tempter’s snare

By thy return, sweet hour of prayer!

Of those whose anxious spirits burn

With strong desires for thy return!

With such I hasten to the place

Where God my Saviour shows His face,

And gladly take my station there,

And wait for thee, sweet hour of prayer!

Thy wings shall my petition bear

To Him whose truth and faithfulness

Engage the waiting soul to bless.

And since He bids me seek His face,

Believe His Word and trust His grace,

I’ll cast on Him my every care,

And wait for thee, sweet hour of prayer!

Till, from Mount Pisgah’s lofty height,

I view my home and take my flight:

This robe of flesh I’ll drop and rise

To seize the everlasting prize;

And shout, while passing through the air, 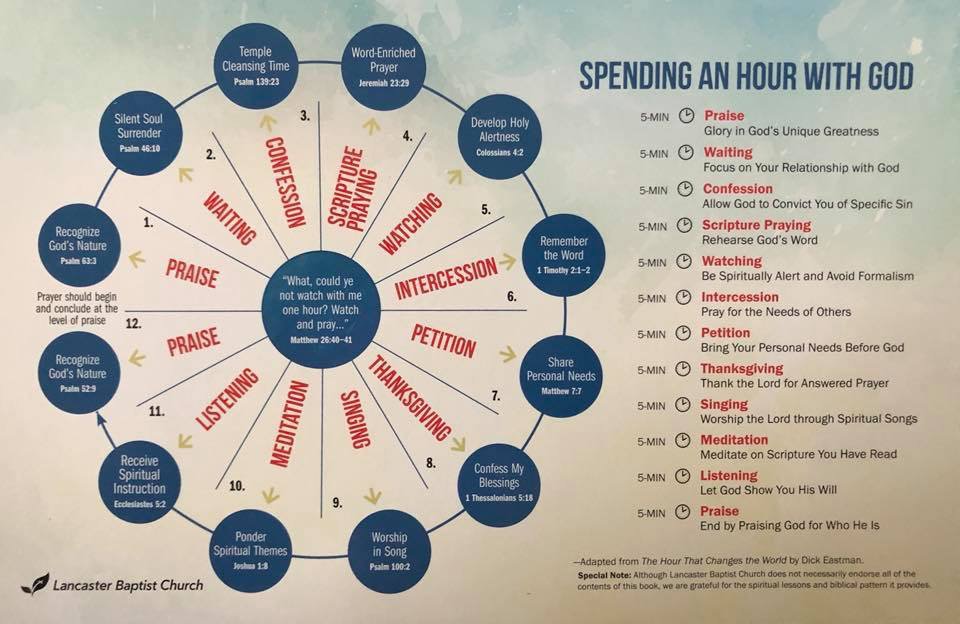 For Pastors And Secretaries

Copyright 2020, A Heart For Revival Ministries, Inc. All Rights Reserved.